Hey there! I hope everyone’s week has gotten off to a great start, and you’ve gotten over the hump that is Wednesday.  This week on Dancing With the Stars, we had Famous Dances Week.  Although the dances for this week were fun, I don’t like that the professionals don’t get to showcase their choreography skills and creativity as much.  However, I can’t really complain about an episode that has Val in sequined shorts (I’m pretty sure I own the same pair, just ask my college roommates).

1. Paige and Mark’s Austin Powers inspired jazz number was bright and fun, and reminded me of Mark’s Mario Bros freestyle that he performed with Sadie Robertson in Season 19. I’d be interested to know what style and dance they were originally assigned, but I doubt it could have been more fun than this one.

2. After a rough week last week, Kim Fields had a comeback with her and partner Sasha Farber’s jive, inspired by Hairspray.  I may be biased because I’m a big fan of the semi-recent movie adaptation of Hairspray (or really any movie with newly-single(!) Zac Efron), but there is something about the songs and atmosphere of Hairspray that make me smile.

3. Saving the best for last, obviously I loved Wanya and Lindsay’s jazz routine, inspired by N*Sync’s performance at the 2000 VMA’s.  I’ve always been #teamnsync so there is no way this wasn’t making the cut.

Did Ya Catch That?

1. The next piece of evidence in the “DWTS will let any past contestant come back to be in the audience” arsenal, is the appearance of Jake Pavelka, member of Bachelor Nation and Season 10 cast member.  I would’ve though Jake had fallen out of favor with ABC after his super awkward confrontation with ex-fiance Vienna Girardi, but you know, ratings.

2. I think Mark’s childhood in England is getting to him, because his accent in the rehearsal package was something I’ve never seen (heard?).

3. While Alan and Brittany swing dance us back from commercials, they also startle a child sitting in the audience.

Dressing With the Stars

This week I wanted to recreate Ginger’s 80’s Janet Jackson inspired look, worn during her and Val’s jazz performance. Some may say that this outfit is a little heavy for the upcoming summer season, but I think all of the different elements of the outfit make it perfect for those nights when you’re just not sure what the temperature is going to be.

1. For a pricier/more luxorious version of the outfit, you could pair this Commando bodysuit, with a pair of Prabal Gurung high waisted pants.  Top the whole look off with a Norma Kamali blazer. 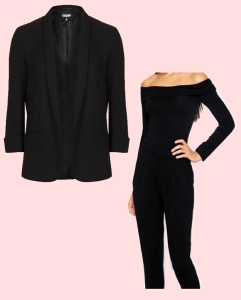 2. Another option is to minimize the pieces needed to make the outfit, and pair a sharp black jumpsuit with a more affordable blazer.

3. To complete the outfit, just add a silver chain and some kick ass lace up booties.

What did you guys think of Famous Dances night? Excited for the Team Dances next week? And who do you think is going to home? Let me know in the comments!