Possibly an unpopular opinion, but I thought this week’s episode was kind of a dull one.  I didn’t really have any “hot takes” while watching, so my thoughts are more like a recap this week.

Thoughts on Episode 5
1. Amanda got the first one on one date, and I could see this coming since Ben made barrettes for her daughters. I really like Amanda, and I think Ben likes her too.

Ben starts the date by waking up the women at 4am.  This was probably my favorite part of the episode due to Lauren H’s retainer, an unclaimed weave (and the fact that Ben knew it was a weave), and Ben affectionately saying good morning to “Jubs”. The two of them go on a hot air balloon date, and its pretty boring.  The only thing I got out of it was to ask myself whether Ben knows these facts about Mexico, or if a producer feeds them to him in the moment. Then they go on a picnic, and they both say “like” a lot.

At “dinner” (they never eat), they discuss Amanda’s previous marriage, which certainly doesn’t sound like a walk in the park. Amanda deserves a guy that wants to spend time with her and her daughters and DEFINITELY deserves one that is faithful to her.  I’m proud of her for putting herself and her girls first and recognizing that she deserves better.  Ben gives her the rose, and I think their relationship is one of the stronger ones on the show.

2. The big story of the group date was Ben sending Jubilee home.  On second viewing, something she said in one of her interviews really struck me.  She said , “Love seeing Ben, hate competing with 9 other girls for a man’s love”. I’m going to bet that the majority of these women feel the same way, but everyone deals with that stress in a different way.  Jubilee’s way was to shut down and put her guard up, something that isn’t going to be beneficial on a show where you need to be able to express your strong feelings for someone in a matter of months. Jubilee needed Ben to tell her she was special, and to give her that confidence that she was standing out amoung the other women. The look on her face when she realized that Ben wasn’t going to give her the validation she wanted at that moment, was truly heartbreaking.

After sending Jubs home, Ben gives Olivia the group date rose. I think he appreciated her desire to spend time with him, when that is what he wasn’t feeling from Jubilee.  That being said, it definitely didn’t help with the other women’s feelings toward her.

Then the big comment of the episode happens. Olivia makes the misguided allusion to Teen Mom when Amanda was discussing her childcare situation while she was away. Immediately, you can see in Olivia’s face that what she meant to get across was not what was received by the other women.  I don’t think she was trying to be malicious towards Amanda, but instead was attempting to make a joke, in poor taste.  I give Amanda and Olivia both a lot of credit for having a discussion about the comment instead of talking behind each other’s backs.

Emily uses her one on one time to talk to Ben about feeling disrespected by Olivia. Her time is interrupted by Olivia. Ben uses some of his time with Olivia to fish for information. She gives up nothing, saying that everything in the house is fine. Next comes a montage of girls talking about Olivia, something I’m sure was prompted by Ben or the producers.

The rose ceremony is about to begin and Ben asks to speak with Olivia. Then the dreaded “To be continued”…..UGH.

Tweets of the Week

Ahh the old taco double entendre. A tale as old as time. #TheBachelor

Ben is impressed by Lauren who survived a breakup but sent home Jubilee who has only SURVIVED A WAR. #TheBachelor

Yeah, Ben, this cliffhanger is your fault. WE’RE STILL TRAUMATIZED FROM ALL THE TO BE CONTINUED EPISODES LAST SEASON. #TheBachelor

An unexpected favorite look was Ben’s from his date with Amanda.  I love a good puffer vest, and I like it paired with the checkered shirt. (My screen grabs may be a bit clearer, but I didn’t catch the best Ben face, #unimpressed). 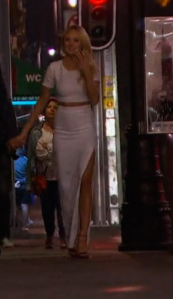 Lauren B’s white two piece maxi was so chic.  I loved the tasteful crop, as well as the high slit.
3.

Amanda’s super casual “girl chat” look was how I wish I looked when I’m lounging.  She looks so cute in a checkered flannel with a bright headband. I look not so cute in a “Nap Queen” sweatshirt, messy bun, and pants if you’re lucky.

What were your thoughts on the episode? Do you think Ben is going to take Olivia’s rose away?  Let me know in the comments!