We’re back Bachelor Nation! It’s a new year and we’ve got a new Bachelor! My New Years Resolution is to actually recap an entire season of The Bachelor, so let’s get started!

The first week doesn’t have much of a story, so we can kick off this season with the three girls who stood out the most to me.

Chris Soules starting the night off with that Iowa humor we’ve come to know and love.

1. Liz is probably the girl with the most press before the season began. She met Nick at Jade and Tanner’s wedding, where she served as the maid-of-honor and he was a guest. However, Liz likes to keep her private life private. When a producer asks her if they spent the night together she “pleads the fifth”. That is, until a few minutes later when an ITM voiceover confirms that they have had sex. It’s a mystery no more!

Upon meeting, Nick looks at Liz a bit confusedly, and Liz takes this to mean he doesn’t remember her.  Say what you will about Nick as the Bachelor, but I would hope that he would at least recognize a girl with whom he has a mutual friend and has had sex with.  C’mon Liz, give the guy some credit! Nick confirms to Chris Harrison that he is 99% sure that the girl he met was Liz, so Liz’s hypothesis is officially debunked. Kudos to Chris Harrison for playing the shocked host card when this information was presented to him.

During their one-on-one time, Liz really shoots herself in the foot. First, she admits she didn’t think he would remember. Then, she tells him that she’s didn’t want him to think she was there just because he was the Bachelor (so she’s just there to get on TV?).  Nick questions why if she was interested in him, she didn’t just reach out to Jade and ask her for his number.  To top it all off, she says she had a stereotype of him until she watched him on Bachelor in Paradise, which aired AFTER she actually met him in person. Not great Liz, not great.

Sarah is my spirit animal.

2. If anyone picked Corrine on their Bachelor Fantasy teams, I think you can rest assured that you’ve got a big point earner. In her intro package we learn that she “runs” a multi-million dollar company (aka she works for a company owned by her dad). She also is a 24 year-old with a nanny, who she describes as someone who does “everything for her”.

Upon her entrance, Corinne earns bonus points with the producers for calling the show a “journey”, and gives Nick a hug token to be redeemed inside. During their one-on-one time she gives him a whole bag of tokens, I guess for a whole lot of hugs?

During the cocktail party we learn, Corinne always goes after what she wants. So, she interrupts Vanessa’s time in order to make out with Nick.  Guess those tokens are for more than hugs.

I wasn’t going to let the dolphin/shark go unaddressed.

3. There are a lot of great girls vying for Nick’s heart, but my absolute favorite is Rachel.  She is a 31 year-old attorney, and is so intelligent and confident.  Through all of her interactions with Nick, she carries herself with a grace that doesn’t show any of her night one nerves.  I was impressed by their conversation, where they both discover they have ties to Wisconsin (him growing up, her attending law school), and agree to disagree about their favorite sports team (I have to go with Nick on this one, Packers > Cowboys). Nick and Rachel’s interaction seems so natural, like the kind of conversation you would have on a first date and not the gimmicky conversation we’ve come to expect from The Bachelor.

In his opening speech, Nick says that he is looking for a woman with a strong personality who feels empowered. Of the women we met tonight, Rachel seems to me like she fits that description to a tee. Nick must agree with me because he gives Rachel the first impression rose.

Corinne! Behave! What would your nanny say?!? #TheBachelor

How is the fact that she's in red the first thing you noticed about the girl riding in ON A CAMEL. #TheBachelor

Danielle’s dress was sexy and tasteful, balancing the side and back cut outs with a modest silhouette. Her dress can be found at LuLu’s for a very reasonable $74! 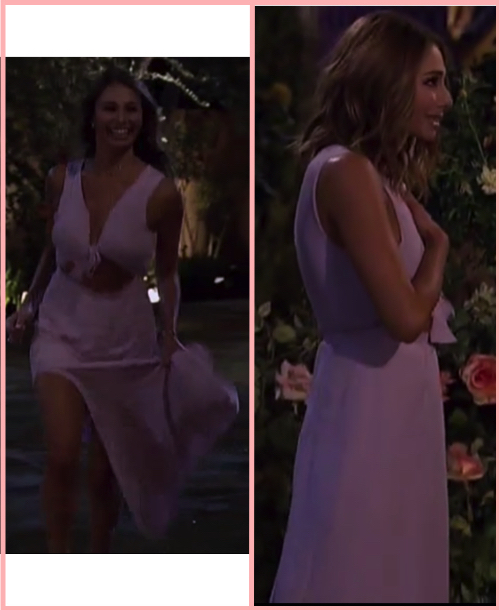 Unfortunately, I wasn’t able to get a good screen shot of the front of Sarah’s dress.  It was fun and flirty in a feminine color, and looked great on her.  Her dress is by a new-to-me brand, Privacy Please, and is no longer available online.  Lucky for you, Revolve carries many of their pieces, and they are all amazing.  Some of my favorites are this, this and this.

Josephine’s dress was simple in the front, but brought the drama in the back.  I’m a sucker for a low back, and this dress stole my heart the minute she walked into the mansion.  Her dress is by Gemeli Power, and can be found at Revolve.

What did you guys think of the premiere? I think my favorites to get Nick’s final rose are Rachel, Sarah, and Vanessa. Let me know yours in the comments, or @third_and_girl.