As much as I want to write 1000 words about Copper and his pool party, I’m not sure that is what you guys are here for. That being said, expect a BUNCH of dog party gifs.

The first date of the week is a group date, where after a BBQ and some backyard football, the men compete to show Rachel who is the best “husband material”. The relay race includes changing a diaper, vacuuming, unclogging a drain, and setting a table. The star power was amped up big time this episode, with Ashton Kutcher and Mila Kunis serving as guest judges for the competition. I know that tons of celebrities are fans of the Bachelor, but I think it speaks to the popularity of Rachel that two A-list celebrities wanted to come on and help her find love.

Unfortunately, Whaboom (this is what most of the men call him, and I think it’s funny so I’m going to join them) wins the competition. I’m unsure if he won any extra time with Rachel, or if he is so boring that they just didn’t show it. I was rooting for Kenny in this race because as a dad it seemed like he actually had the most experience in this arena. And he knew better than to dunk the babies head in the sink while “unclogging the drain”.

During the evening, Rachel and the guys spend time, and Rachel is #unimpressed. None of the men are wowing her, filling her time with uninspired conversations, and the inability to make a move. The only guys who even attempt interesting conversation are Dean, who Rachel shares a sense of humor with, and Kenny, who tells Rachel about his daughter. We also find out on this date that Whaboom and Blake know each other from outside of the show. Blake says that he used to live with Lucas’s ex-girlfriend and that he knows he is there just to gain publicity. Funny that Blake would say that, as Whaboom and Blake were on the same season of a show called ‘Ex Isle’, where couples came to fix their relationships, only to be tempted by ‘sexy singles’. Lucas was there with his ex-girlfriend (the same one that Blake lived with), and Blake was there to try and create friction in the relationship. I don’t blame either of them for not liking the other, but it’s a bit of the pot calling the kettle black for Blake to say Lucas is there for the wrong reasons. Dean gets the group date rose, and finally takes initiative and kisses Rachel as he walks her out.
_____

This has got to be the greatest surprise of Peter’s life.

Is everyone ready to swoon? Peter gets the first one-on-one date, and Rachel is taking him to Palm Springs on a private jet. Not only that, her dog Copper is going along, and they are going to a dog pool party. If any of you know me, you know that this is literally my dream. I want to live at this dog pool party.

It took awhile for me to settle down from seeing all those dogs, but once I did I liked what I saw. Rachel and Peter have an ease about their relationship that can’t be manufactured, you either have it or you don’t. At night, Peter and Rachel bond over their mutual love of therapy and gapped teeth. The therapy conversation was interesting because it showed that both of them are interested in improving themselves, and are not afraid to ask for help when it comes to relationships. I think that this will help them both immensely as their relationship progresses.
_____

The last date was another one I would love, a basketball date featuring Kareem Abdul-Jabbar. This season is really amping up the star power. The men were put through drills by Kareem, and he essentially just made fun of them the entire time. It was fantastic. DeMario and Eric thought they were ballers on the court, but only one of them could back up their talk with an actual game. Unfortunately for DeMario, that wasn’t the only game he was playing.

At the conclusion of the date, Rachel is confronted by Lexi, a girl claiming to be DeMario’s girlfriend. He essentially ghosted her upon coming on the show, and she had the text messages to prove it. There were so many great moments in this exchange; whether it be the look on DeMario’s face when he recognizes Lexi and then remembers that he has to pretend he doesn’t know who she is or, Rachel telling him to ‘Get the F*&! out’. Gold.

Rachel is upset by this whole exchange and tells the remaining men that she isn’t there to play games and if they are they can get out as well. I was surprised that she chose to have the nighttime portion of the date. In the past, I feel like if the lead has a large disruption to their process like this, they normally cancel the nighttime portion because the day has just been too much. At night, all the men seemed very concerned about Rachel, and how she is holding up after the afternoon’s shocker. She has the best conversation with Josiah and gives him the group date rose.

At the rose ceremony, an uninvited guest shows up. Any guesses who? Obviously DeMario comes back to talk to Rachel. We don’t get to see if Rachel allows him to talk to her as the episode ends with Mr. Harrison (as the security guard calls him) telling Rachel of DeMario’s arrival. To be Continued….

I really hope this is the year that Paulie gets to go to Paradise. #TheBachelorette https://t.co/z7A5moVmzh

ashton: what's a whaboom mila: it's the sound that he makes ashton: why mila: just because he can ashton: *looks very sad* #TheBachelorette

Obviously Rachel is always going to be the best dressed in this season, unless her gal pals make more appearances. Here are the details on some of her outfits from this episode!

For the afternoon BBQ, Rachel opted for a fun floral dress. Her dress is Self-Portrait and can be found here.

Rachel wore this sparkly shift dress to the nighttime portion of her basketball date. This dress is Mlv and appears to be sold out. I found a similar dress in a different color which can be found here (and it’s on sale! WOOT!).

This zipper detailed dress Rachel wore is absolute fire. This dress is by Michelle Mason, and can be found here (at over 50% off).

Rachel’s rose ceremony dress is by Mac Duggal and can be bought here. 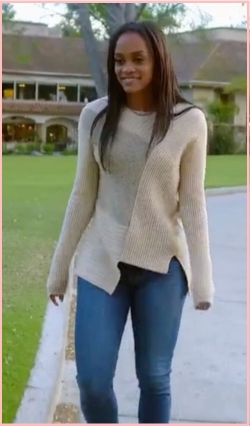 I tried so hard to find this asymmetrical ribbed sweater that Rachel wore to play with Copper. Alas, I didn’t have any luck. I did find a pretty similar sweater here, although it has a bit of a high price tag.

What did you guys think of Episode 2 of Rachel’s quest to find love? I’m still loving Peter and Kenny, and am looking forward to getting to know even more of the men!

3 thoughts on “who let the dogs out-rachel:week 2”