Short episode last week, hella long episode this week. Most of this post is going to focus on the actual episode (both parts), and then I’ll cover some of the outfits from the Women Tell All. I really don’t want to write about that, as it’s just a bunch of people trying to talk over each other.

The episode starts with the Andi/Nick “confrontation” that was teased at the end of the last episode. I know you were all shocked to discover that this confrontation was really just Andi giving Nick advice as he heads into the Fantasy Suites. I question the choice of the producers to bring Andi back, as she didn’t have the kindest words to say about her personal Fantasy Suite experience with Nick in her book. That being said, we did get to see Andi bring up Nick’s infamous, “if you weren’t in love with me why did you make love to me?” quote which makes me laugh every time I hear it. Sorry, Nick.

The rose ceremony had very little drama for me. With Rachel being announced as the Bachelorette so long ago, I didn’t have any doubts that she made it to the top 3.

Nick’s goodbye to Corinne was kind of bizarre. He seemed to really like her, but know that she was not ready to be married, but simultaneously seemed happy to send her packing. In her exit interview, Corinne went on a rant about how she no longer is going to try and act a certain way to impress a man. Take your own advice Corinne, and we’ll see you in Paradise!

Vanessa, Raven, Rachel and Nick are heading to Finland, somewhere I personally have always wanted to go.  Seeing the Northern Lights is definitely on my bucket list. Raven has the first Fantasy Suite date, and I really love her and Nick together. Their conversation seems so natural, and I think the two of them could really build a life together. I also like that Raven is not afraid to give Nick some of her sass.

As much as I love Raven, I really wish we hadn’t spent such a long time hearing about how she had never had an orgasm. I have to believe there were a few too many alcoholic beverages and a bit of producer goading that got her to admit that on camera. Although this is the girl who admitted to beating an ex with a stiletto so maybe she truly has no filter. The first half of the episode ends with Nick and Raven cuddling in this ah-mazing skylit room, so we had to wait a whole week to see how Nick stacked up to Raven’s ex.

The next morning, Raven gives the impression that Nick really satisfied her needs. I’m a little sad that that was the least gross way that I could put that. Kudos to the producers for the extended montage of Raven skipping through Finland after her night with Nick.

The next date is Rachel, and SPOILER ALERT she’s the new Bachelorette. So I had to imagine this would be her and Nick’s last date. As much as the Bachelor producers don’t mind spoiling part of their show, I don’t think they would want to spoil the final rose.

At night, Rachel finally drops the bomb that she is falling in love with Nick….uh duh. Nick is giggling like a school girl at this news and I still can not for the life of me figure out how she is not the one. The two spend the night in the fantasy suite and then spend an adorable morning making breakfast together. Rachel’s penguin onesie just makes me love her even more.

Vanessa and Nick spend their date jumping from an ice bath into a sauna. Nick seems to be a bit of a baby and unable to stay in the ice bath for more than .5 seconds, while Vanessa is ready to set up camp.

Luckily for Nick, the Bachelor producers have blessed him with a hot tub, so that he can have a heart to heart with Vanessa about their futures. I found it weird Nick kept calling Vanessa’s family traditional….as in they just had a lot of family traditions. To me, traditional harkens back to more of traditional family values aka June Cleaver and the families of the 50’s. Am I the only one?

For some reason, Nick and Vanessa’s relationship seems combative to me. They always seem to be arguing, which I think Nick likes because it keeps him on his toes. However, their arguments never have a resolution. For example, they talk about the fact that they currently live in different countries and where they would live if they got engaged, but never actually come to any type of decision or meeting of the minds. It’s very odd to me.

That being said, Vanessa is obviously in love with Nick (I don’t see it, but of course she is, it’s the Bachelor). She tells him at dinner, and he has a seriously odd look on his face. I’m not sure if it is the camera angle, but it seems like he’s not even looking at her. It could be producer manipulation of the actual conversation or Nick is just a weirdo, I wouldn’t be surprised either way.

At the rose ceremony, we know Rachel is going home but that doesn’t make it any less hard to see her go. Nick seemed really broken up about it, mentioning that he selfishly hopes that this isn’t the end of their relationship. Uhmm, maybe don’t break up with her then Nick? He really missed out on a good one with her.

"Hey we disagreed all day. I love you." #TheBachelor

If anyone's still wondering why Rachel's the Bachelorette, she just used the word "reciprocity" correctly. On #TheBachelor. Let that sink in

My actual reaction when I found out @viallnicholas28 prefers ironing over steaming clothes. #TheBachelor https://t.co/lOWzEbyg8C 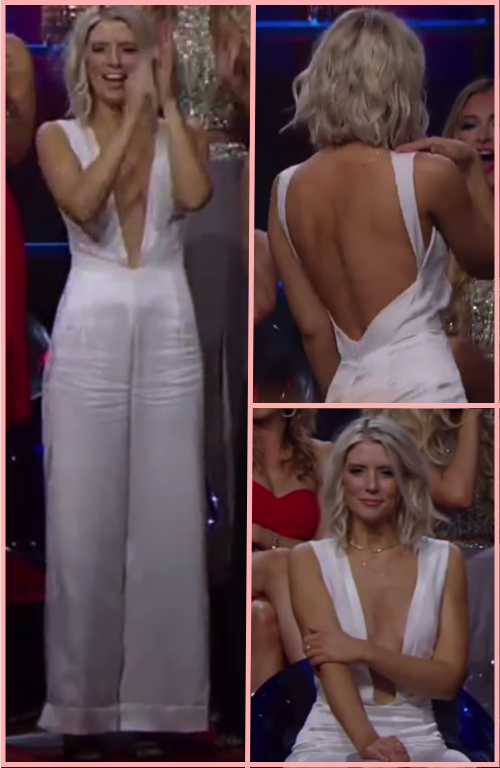 I am obsessed with the jumpsuit that Danielle M. wore to the Women Tell All, as well as her new platinum hair color. She looks amazing. Unfortunately for us, Danielle’s jumpsuit was custom made by Cavanagh Baker, who made her jumpsuit that I loved in this episode. I found a few that were comparable here and here.

Sarah has been a style favorite of mine throughout the entire season, and she didn’t disappoint at the Women Tell All. She looked adorable in a lace Stylestalker romper, which can be purchased on their website here. If the price point isn’t for you (don’t worry, me either), this romper can be rented through the Stylist LA, which works a lot like Rent the Runway. I liked how she paired it with a criss-cross undershirt to amp up the deep v-neck. 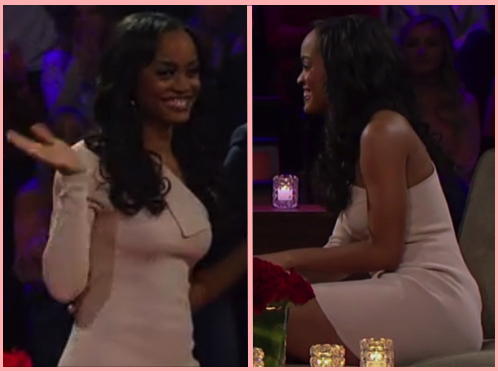 When Rachel came out for her time as the Bachelorette, we knew she was going to be looking great, she’s got that Bachelorette budget now. Rachel’s dress is by Dion Lee and can be found here. I found a few more cost effective options here and here.

The next episode is the finale, and we will finally find out who Nick has decided to break up with in a few months….I mean get engaged to. Who do you think it is, Raven or Vanessa? Let me know!

source for gifs not made by me