Hi there! I hope everyone had a nice Memorial Day Weekend, and pray that you didn’t have as much trouble getting back into the swing of things at work as I did.  I’m back to recap the second week of Jojo’s journey to find love, so let’s get to it.

1. We start the second week of JoJo’s journey to find love with a group date, which features the men donning firefighting gear and competing for the chance to save JoJo. The only thing I could think for most of this date was how embarrassing it would be for Grant if he didn’t win. Imagine if a legitimate firefighter lost this competition to a radio DJ? Thankfully, that didn’t have to happen because Wells almost died (I’m not thankful for that, I’m really glad Wells made it through, he’s one of my faves), and Grant beat Luke up to the top of the “burning” building to save JoJo.

Grant wins extra time with JoJo at the cocktail party that night, and they have a really nice conversation about Grant’s career choice. JoJo is into it and Grant gets the first kiss of the night. Luke and JoJo also have a nice talk, which ends in a steamy make-out on the balcony.  JoJo is definitely into Luke. My favorite one-on-one chat of the date was between JoJo and Wells. Wells was the perfect amount of self-depricating about his poor physical showing at the firefighting challenge, and he had JoJo cracking up. Wells is really turning into a dark horse in the competition for me, I just hope that he doesn’t end up getting friend zoned. I don’t think we have to worry about that quite yet though, because JoJo loves that Wells never gave up during the competition and gives him the group date rose.

The second group date of the episode was one that I would love! The guys got to visit ESPN’s Los Angeles studios and run a Bachelorette combine of sorts trying to get on Marcellus Wiley and Max Kellerman’s big board. The guys had to perform a Bachelorette worthy touchdown dance, and give JoJo their best proposal after playing a non-alcoholic form of dizzy bat. Lastly, they had to give a press conference complete with questions about their feelings for the other guys (DRAMA ALERT!).

Chad was a big subject on this date, but enough went on with him this episode to warrant having a whole section devoted to his behavior. So stay tuned for Chad-talk.

The nighttime portion of the date took place at the Houdini mansion, which was a really cool venue. James Taylor steals her away first, and creates one of the sweetest moments in Bachelorette history. He mentions that he knows JoJo isn’t in his league, and that scares him, but he thinks she wants a guy that cares for her and that is him. I loved that James mentioned his faith, and how he really can’t believe how blessed he is to be in the situation that he is currently in.  You can tell that this really touched JoJo, and I think they connected on a deeper level in that moment.  To solidify that connection, James goes in for the kiss, and JoJo goes in for the second one.  To round out James’s awesome qualities, he said yoked, so that’s another one in the plus column.

Nothing too interesting happens on the rest of this group date that doesn’t involve Chad. James got the group date rose (no surprise there), while Chad thinks it should have been him.

2. JoJo’s one-on-one date this week was with Derek, someone who I think could be a quiet contender.  I mean, the guy looks like John Krasinski but with ice blue eyes. However, their date was not super eventful, as it consisted of them making a series of “difficult” choices, which would create components of their date.  It was pretty much a real-life create your own adventure book.  However, I’m not one to lose sleep over a decision about whether to take a private plane north or south.

Their choices ultimately lead them to San Francisco, where they have a picnic overlooking the Golden Gate Bridge, and later, dinner. During their dinner, JoJo opens up about getting back on the dating scene after Ben, and encourages Derek to open up about his past relationships. Derek reveals that he had been ready to propose to a previous girlfriend, but then found out that there was another guy in the picture. He was being very vague during all of this, and for awhile I wondered if he was the one doing the cheating.  Alas, we wouldn’t get that drama, and JoJo gives him the date rose.

3. Ah Chad, finally we get to the center of the episode. Chad was the narrator of all the dates this week, even the ones he wasn’t on.  The man has a comment about every other man in the house and how he is better than all of them.  Chad is above doing any bonding with the other guys (Although, I don’t think I’d be into singing songs about JoJo with a bunch of dudes either. I guess they get bored without their phones). He would much rather tie a suitcase full of protein to his waist and do some pull-ups.

On the group date, Chad simultaneously was taking the Bachelor “combine” not seriously and WAY too seriously. When asked to propose to JoJo he went with a simple “Will you marry me?”. JoJo asked for him to explain a little why he wanted to marry her, and Chad said that if they were at that point she should already know. He wasn’t above trying to woo her though, going with the always successful “call a woman naggy, and she’ll love you forever”.

Chad’s main gripe with all the men was that they were all lying to JoJo by telling her things that they loved about her, or really by expressing any feelings toward her. It was his idea that they barely know this girl, so all their feelings were based on what they had seen on TV. Unfortunately, he’s kind or right in this situation. There is no way that any of these men love JoJo, but the “proposal” on the group date was meant to be fun.  JoJo certainly wasn’t taking any of those proposals seriously. At the night time portion of the date, Chad actually opened up, and talked to JoJo about losing his mom.  This endeared him to JoJo, and reminded America that there are multiple sides to every person.

At the rose ceremony, Chad was back in Chad form. He greeted JoJo when she arrived to the mansion, stealing her away before she even got to see any of the other guys.  I’m not sure if this was Chad’s idea, or a producer’s, but I actually think it was a good move.  Honestly, if any of the other guys had done this, no one inside would have been mad.  The show is about finding love, and the way to do that is to spend as much time as you can with someone. Once inside, Chad was confronted by the other men, which only made him steal JoJo away more. The main contention seems to be between Chad and Alex, who he had a few confrontations with during the rose ceremony.  One of them almost got physical, with Chad claiming that Alex should be afraid of him.  Maybe he forgot that Alex is a U.S. Marine? Also, Chad did all this while eating copious amounts of meat.

The Chad is getting nervous because JoJo is leaving him hanging. See what we did there? Hanging Chad? High-five? Anyone? #TheBachelorette

All day all I could think about was "I wonder how much meat chad has eaten today?" #TheBachelorette

WTAF is this nightmare? #TheBachelorette https://t.co/5D0JFSqlew 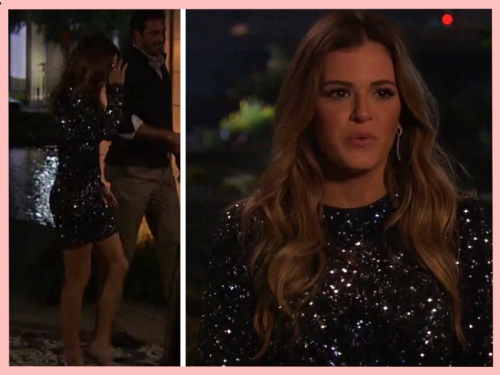 1. I loved this sparkly mini JoJo wore on her one-on-one date with Derek.

2. JoJo brings the edge factor with this leather legging and white sweater combo.  I didn’t love the fringe on the sweater, but the make-up and giant ring made up for it.

3. As for the guys, my favorite look was Luke.  I really fell for that gingham pocket square.

What did you guys think of the episode? Who are your favorites? Next week we have two episodes, so look out for double Bachelorette posts next week!

One thought on “burnin’ up-jojo:week 2”