I’m going to try something a little different this week, and give more of my impressions of the relationships than a general play by play of what went down.  I figure if you guys are checking this recap out, you’ve probably already watched the episode and don’t need to know every time Corinne was drunk in an ITM.

We start this week where we left off last week, with the Taylor vs. Corinne feud.  We all knew this  relationship was going to come to a head at some point, and we get that with the dreaded 2-on-1 date. Although I am #TeamTaylor in this conflict, Corinne said some things throughout the episode that made me think about this feud in a different light. When arguing with Taylor at the rose ceremony, Corinne actually has concrete examples of how Taylor has made her feel un-welcome or disrespected. When Taylor responds that she doesn’t want to be fake to people, Corinne says, “that’s not what we want.” She isn’t making the confrontation entirely about her, which makes me think that there may be some merit to her complaints. There are two sides to every story, and the producers can choose to only one side. However, I question that when Corinne chooses to tell Nick that Taylor verbally attacked her and then gloat about her take down in her ITM.

On a more positive note, the dates are heading to New Orleans and the first date of this week belonged to Rachel aka my girl crush. From all the one-on-ones that we’ve seen, I really think that Nick and Rachel have the best chemistry. The entire date, Nick can’t keep his hands off of her, and their chemistry jumps through the screen at you. From trying beignets to dancing with The Second Line, these two just really seem to be in sync. Something I thought was really refreshing about Rachel, is she acknowledges the process that she is on.  When The Second Line is coming down the street, she says in an ITM that she knows that it is for them.  Any person walking in New Orleans wouldn’t assume that, but she knows that this is a show, and things are amped up. There is none of the “oh my gosh, I can’t believe that there is a private concert/helicopter ride/hot tub in a corn field” with her.

At night, Nick isn’t afraid to tell Rachel that he’s into her, even saying “I don’t know if I’m breaking the rules, but I’m super into you.” There doesn’t seem to be any hesitation in him when talking about meeting her family. He sees Rachel being here for the long haul. My favorite interaction between the two of them was regarding Rachel’s dad who is a federal judge.

Nick thinks he’s going to meet Rachel’s family in the future, and he wants to get this out of the way in preparation. No surprise, Rachel gets the rose.

The group date of this week had all of the women spending the day at a haunted house. It’s a perfect date for New Orleans, but it doesn’t have a ton of substance. The majority of the air time is spent on the girls being scared in the house, and odd “coincidences” happening due to spirits. I’m guessing there were a lot of producers in that house that night.

The only meaningful interactions on this date happened in a few one-on-one sessions outside. In Raven’s time, she accidentally lets it slip that she loves Nick. I loved how she was not embarrassed about it, or anxious/paranoid that it was too soon. She had the outlook of “Eh, I feel it, I said it. It is what it is.”. Nick’s one-on-one time with Danielle M. was also pretty significant, as he gave her the group date rose. From what was shown, they did more cuddling and kissing than talking but I like Danielle M. a lot.

As I said earlier, Taylor and Corinne are put on the two-on-one. On their  date in the bayou, you could cut the tension with a knife. Piggybacking on her previous conversation with Nick, Corinne reiterates how Taylor makes emotionally attacked her, called her stupid, and made her feel bullied. Nick asks Taylor about this, telling her that he was surprised, and despite all of Taylor’s insistence that it is not true and also surprises her, Corinne had already buried her too deep. Corinne gets the group date rose, leaving Taylor alone in the bayou. Unable to go out on Corinne’s terms, Taylor decides to crash Nick and Corinne’s dinner. I normally hate this move, but I don’t blame Taylor in this case. She wasn’t able to really, truly defend herself as she was trying to make a good impression and not spend her alone time with Nick talking about Corinne. After not being given a rose, she has nothing to lose, but she does have her reputation to protect. Obviously, we don’t get to see the conversation between Nick and Taylor, as we get the dreaded, “To Be Continued…”.

We lost style star Sarah, Astrid, and Taylor in this episode, and from the preview it seems Corinne could be right behind them. Here’s to hoping!

Fun fact: "Thinking With His D***" was the original working title for #TheBachelor.

Nick: Whitney, will you accept this rose? America: Whitney, do you even go here? #Who? #TheBachelor

The shirt Danielle wore upon their arrival to New Orleans was so casual and cool. I wasn’t able to find Danielle’s exact shirt but you I found some similar cold shoulder lace tops with a similar vibe. You can check them out here, here, and here.

My girl knows how to do casual like no other. I loved the sexiness of the open back of Rachel’s body suit, paired with some really cool distressed and high-waisted jeans. While trying to find the exact jeans (unfortunately I failed), I got really excited for spring, and the ability to wear distressed denim again.  Some similar bodysuit options can be found here and here, and some denim options can be found here, here, and here. 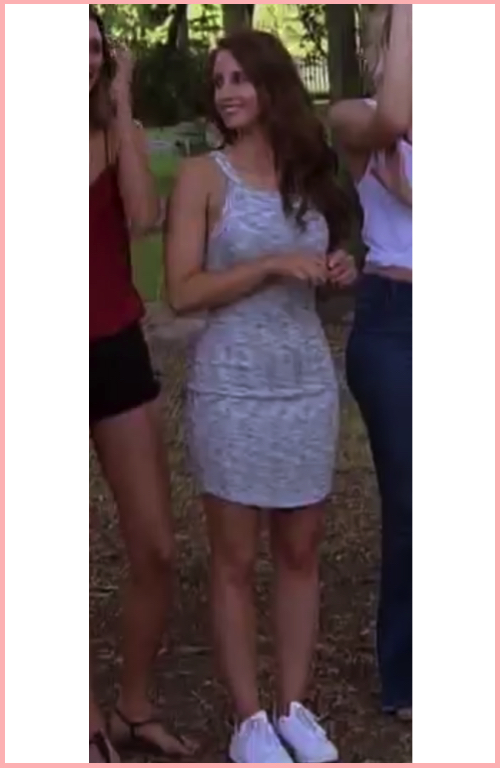 Vanessa’s dress for the group date looked SO comfy.  If you know me, you know I’m a girl who loves to be comfortable (My boyfriend bought the majority of my Christmas presents by reading this Buzzfeed article, and I loved everyone of them). Besides its comfort, Vanessa looked amazing in this form fitting, grey, racerback dress. I’ve found some similar, and very budget-friendly(!), options here, here, and here.

What did you guys think of this episode? Are you hoping Corinne gets the boot next week or do you love the entertainment that she brings? Let me know in the comments!